On March 13, AOAC stakeholders delved into the complexities of testing for food fraud and authenticity in a spirited discussion during the Midyear Meeting. Two working groups, one on targeted and one on non-targeted testing, presented draft Standard Method Performance Requirements (SMPRs) that were the result of a year of work on three commodities that top the list in food fraud: honey, milk, and olive oil.

As the public comment period opens for these standards, the working group members and leaders took pains to present not just the SMPRs, but their logic in determining which of innumerable options were the best to ensure methods meet real-world testing needs. Even in its infancy, this program is breaking new ground and laying the groundwork for potential impact in the food industry in the next year. 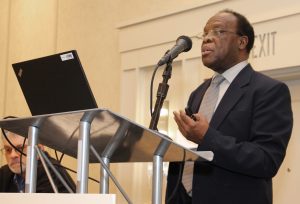 Dr. Joe Boison of EJ Consultancy, Chair of the Targeted Testing Working Group, presented the three draft SMPRs for targeted testing of these foods. An immediate problem was the lack of authentic samples for both honey and olive oil. However, while it is clear that the sampling is critical to the validity of the analysis, the group’s charge was to solve problems at the second, analytical step and for the time being it will be necessary to rely on honest producers for authentic honey and extra virgin olive oil samples at this point.

The draft SMPR for honey focused on identifying the most common adulterants, including barley and malt extract and sugar syrups introduced into floral and acacia honey.

Olive oil, the second commodity examined, is probably the most expensive commodity most people use, leading to lots of effort to profit from it from intentional adulteration. While there are several adulterants, the two most significant are other vegetable oils and low-quality olive oils, and these were targeted by the draft SMPR.

The draft SMPR for milk targeted formaldehyde, starch and soy protein as the highest priority adulterants for milk. Boison noted that although not all were there intentionally. Formalin is usually introduced from cleaning of machinery and is found at very low concentrations. Starch and soy are found at higher concentrations because these are added intentionally to boost volume.

Following a lengthy discussion, a consensus was reached that all three draft SMPRs are ready to advance to public comment.

The Non-Targeted Testing working group’s SMPRs were presented by Dr. John Szpylka, who noted the complexities of monitoring any product for the probable existence of an economically motivated adulterant (EMA), because it is clear that as tests are developed, bad actors will respond with ways to try to beat them.

For honey, the SMPR targeted introduced molasses and sugars. The working group intentionally designed an SMPR that is very general in terms of techniques to keep options open for any type of technology that works. With the number of potential techniques from handheld IR sensors, 2-D mass spectrometry and more, any method that works should be evaluated.

The group also kept the scope of the SMPR broad, with a goal of ensuring a method can clearly answer a simple question: is this product adulterated or not? Method developers will be able to choose any type of honey, so long as it is proven to work on that honey. Once that baseline is established, potentially the scope of the method can be expanded to other types.

In the discussion, the issue of authentic samples re-emerged, with the comment that just because a sample comes directly from a hive does not guarantee “authenticity” due to variables in their feed that must be documented. With hive health a common issue, many keepers are feeding their bees artificially.

The SMPR for extra virgin olive oil is essentially the same as for honey, and the scope was intentionally kept broad to allow more methods to be evaluated.  Adulterants typically include substitute oils like sunflower, corn, hazelnut, canola, safflower, and olive oil that is not extra virgin or is of false origin. Szpylka noted that this list will probably grow as other adulterants are identified or new ones introduced.

Unlike the targeted testing for milk, the working group limited the SMPR for milk to apply only to pasteurized liquid bovine raw milk to ensure the stability needed for samples shipping across borders. Adulterants include urea, melamine, water, sucrose, whey, vegetable oils (especially soy oil), maltodextrin, and starch. Minimum levels were kept low with the exception of melamine, which has a higher threshold to be economically effective. With urea, there is some natural variability, but any level above 6 percent is adulteration.

The discussion concluded with the consensus that all three SMPRs are ready to advance to public comment.

Deeds and Brzenzinski focused on DNA barcoding for identifying species substitutions in the seafood industry, highlighting the FDA’s process and workflow for this and introducing the FDA Reference Standard Sequence Library for Seafood Identification (RSSL) database.

Get weekly news from AOAC on science, events, training, and more - Subscribe now!